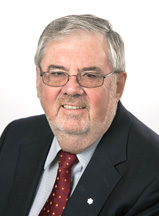 Born in Rockland, near Ottawa, Robert J. Giroux holds both a bachelor’s degree in commerce (economics) and a master’s degree in science (economics) from the University of Ottawa, where he has also taught statistics and public administration.

Mr. Giroux was Chair of the Board of Governors at the University of Ottawa from December 2009 to June 2017.

From 1995 to 2004, Mr. Giroux led the Association of Universities and Colleges of Canada (AUCC). Earlier in his career, from 1982 to 1986 he was deputy minister for Customs and Excise with Revenue Canada and deputy minister at the Ministry of Public Works from 1986 to 1990. He was president of the Public Service Commission from 1990 to 1994 and was then appointed Secretary of the Treasury Board of Canada and Comptroller General of Canada in 1994 and 1995.

During his career in the public service, Mr. Giroux contributed to several projects and international programs providing him with an in depth knowledge of global issues, which in turn contributed to his thorough understanding of the complex policy environment in which universities operate.

He took the reins of the AUCC at a difficult time. Universities were concerned with such issues as accountability, performance indicators and new funding formulas. Universities were at a critical juncture in terms of their contribution to Canada’s prosperity.

His exceptional leadership, diplomacy and dedication gave a new dimension to the position of President and Chief Executive Officer of the AUCC. Applying these qualities wisely, he was able to address important issues.

Over the last 15 years, he has also been part of the board of the Ottawa Hospital, the Public Policy Forum, the Université du Québec en Outaouais, the National Film Board of Canada and the Institute of Public Administration of Canada where he was also president. He was also chair of the selection committee for the Ordre de Gatineau from 2005 to 2008.