“We decided to focus on being a real neighbourhood brewery, and that involves being active in the community and giving back.”

The brewery and bottle shop features a prohibition era theme inspired by the heritage building in which it’s located, while also serving as a neighbourhood brewery. It even offers five dollar flights (a sampling of beers) of which two dollars goes to a different charity every month.

“We decided to focus on being a real neighbourhood brewery, and that involves being active in the community and giving back,” said head brewer Chainey. “But it’s not just that. Prohibition was a time when we saw female political groups making a difference, the temperance movement and people of mixed colour and gender together in the same bars.”

The brewery's casks were built from scratch by Chainey and his father at the brewery because the old, narrow staircase and doorway were too small to fit large pieces through.

Chainey had been a self-taught home brewer for six years prior to opening the brewery, offering samples to colleagues and friends. When one of the colleagues (Dagher) began to talk about the location on Waller Street, which he held a lease for, talk of a brewery became serious.

By day, Chainey is a bridge engineer mostly working in recent years with a consulting firm on interprovincial bridge jobs in Ottawa. These skills came in handy once the group had to deal with the renovation process and building the brewing equipment from scratch.

When they secured the location for the brewery, the Lunenburg Pub was still open, so Chainey had to go in at 4 a.m. every day to do the construction work in the basement, before going to his engineering job.

“The brewery was literally half an inch from being impossible to build due to boundaries set with the building’s heritage status,” said Chainey. “We had to work with a lot of engineers and inspectors to make it possible.”

Dagher, like Chainey, is a bridge engineer who has worked on several projects in the Ottawa area. He is currently working on stage two of the Light Rail Transit project. He has extensive experience in entrepreneurship ventures on his own, including with Hooch Bourbon House, and has been an active member of the Downtown Rideau BIA since 2011.

“I’m one of the founders of Waller St. Brewing and a business partner,” said Dagher. “I help out where needed but for the most part I’m behind the scenes taking care of business related matters.”

Last but not least, George Bush — without “W.” or “H.W.” — handles the sales side of things, marketing the beer to restaurants.

“I also do a lot of our social and festival events. Basically I’m the guy who pushes our brand on other people,” said Bush. “As for what I do outside of the brewery, I work full time as a supervisor at The Waverley on Elgin St.”

Bush has a long history in the hospitality industry and was involved in opening
Pub 101, the Cabin and Woody’s Pub. Still, he feels he’s benefitted from his human kinetics and education degrees.

“Even though these two fields do not relate directly to the brewery, the hard work, social and organizational skills that develop through doing two degrees transfer over to being the guy responsible for our brand,” said Bush.

Ironically, the trio met at the Lunenburg Pub, which was managed by Bush and owned by Dagher. Chainey and Dagher were working for the same engineering firm at the time and came up with the idea of starting a brewery.

“Once they had a business plan and an overall idea of what they were looking for, they graciously asked if I wanted to be a part of this adventure,” said Bush. “I obviously accepted and the rest is history!”

Main photo:
The Waller St Brewery opened officially in August but getting it to work was a much longer process (From left: George Bush, Elie Dagher and Marc-André Chainey). Photo: Courtesy of Waller St Brewery 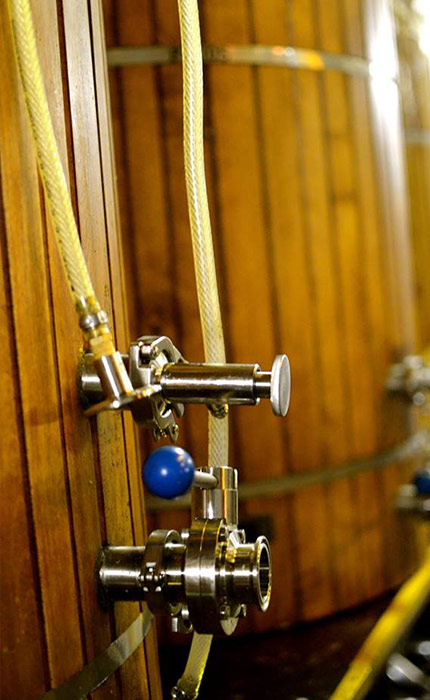