“My world was literally turned upside down. I was always on the go…I had a fast-paced life. Then from one minute to the next, I couldn’t do anything any more.”

Fannie Desforges (BScSoc ’12, BEd ’13) has long been a fighter – and a winner. Four-time participant in Red Bull Crashed Ice, an ice cross race where competitors skate down a massive track filled with jumps and hairpin turns, she claimed two 2012 world championship titles, in Quebec City and Niagara Falls.

It was during the world championships that this determined and daring athlete earned the nickname Fearless Fannie, bestowed on her by the spectators.

Desforges spent five years at the University of Ottawa, where she completed degrees in social science and education and was a member of the women’s hockey team, including a stint as Gee-Gees captain.

In 2013, she really grew into her nickname during her time as assistant coach of the Canadian women’s ball hockey team. She helped Team Canada claim the gold medal at the women’s world championship in St. John’s, Newfoundland.

Fannie Desforges had been a successful athlete for a number of years. Then everything changed and, in an instant, her life turned upside down.

While playing at the National Ball Hockey Championship in August 2015, she took a hard hit to the head, which cost her dearly. She began experiencing headaches and nausea, feeling irritable and suffering from insomnia — all telltale signs of a concussion.

The diagnosis hit her like a ton of bricks. It meant the end of sports, championships, victories – all of it. Her dream of pursuing a new job at a high school in Eastern Ontario also vanished. She had just started that job in September 2015, but it didn’t take long before the concussion began to affect her professional life.

“I’d finish work at 3 p.m., get home at 3:30 and immediately go to bed until the next morning,” she recalls. “It was only when my doctor put me on medical leave that I realized just how serious my injury was. I had to spend a long time at home resting. I couldn’t do anything. I had to stay in a darkened room – light would give me bad headaches. All alone with my thoughts, time began to stand still.”

Finally, Desforges started to see the light at the end of the tunnel. Complete rest and then a course of physio had started to make a difference. After five months, she was finally able to return to work. Ready to get back into to the classroom, she began applying for jobs and going for interviews.

One ad in particular grabbed her attention — a position as a teacher in a hospital setting through Le Transit, a consolidation of services for children with special needs. “I was quite intrigued when I saw the job posting,” Desforges says.

Teacher at the Children’s Hospital of Eastern Ontario (CHEO)? Why not! 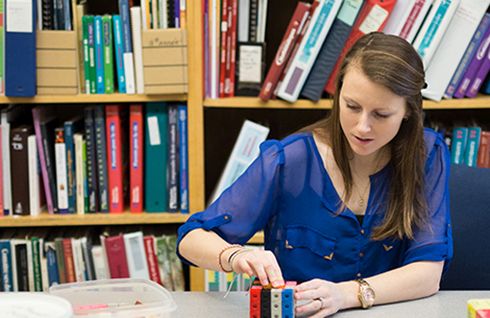 “I accepted the job, which actually suited my health situation perfectly. I thought to myself that if anything happened to me, I’d already be at the hospital,” she chuckles.

Her cheerful nature and sense of humour are contagious and helped her make the transition to a hospital setting – which, in her view, isn’t that different from the life of sport.

“At CHEO, as in hockey, teamwork and communication are a necessity,” Desforges says. “You can see by the extraordinary cooperation and rapport between the nurses, social workers, psychologists, doctors and teachers that they are all working together for the well-being of the child.

“Children who found themselves in the hospital didn't always understand why they were there. But they were so happy to see us — it was such a heartwarming experience.”

What is a day like in the life of a teacher at CHEO? “Routine was not in our vocabulary!” she says with a smile. “One day rolled into the next, but there were no two alike.” Whether children were in for treatment for a single day or had been hospitalized for a while, they were all welcome in Desforges’ class.

“We learned our ABCs together. We had fun playing with geometric shapes,” she says. “I adapted what I did to the needs and the health situation of the child.”

It didn’t matter to Desforges whether a child lost a crayon or threw their pencil or whether they broke out laughing in the middle of an activity. She appreciated every little moment with her students.

“I’ve received numerous awards in the past and have been recognized by my peers, mainly due to the victories I’ve had in sport. Now I could give back to these children who were fighting for their life every day.”

This woman who has brought home her share of trophies has also experienced the flip side, just like the children in her CHEO classroom.

Although winning doesn’t have the same meaning these days for Desforges, she hasn’t stopped fighting — not only for her health but also for her new teammates: the children who light up her days. She is now back at L'école Secondaire Publique Le Sommet in Hawkesbury, Ontario, resuming the job she had to leave because of the concussion — but she will never forget her CHEO teammates.