Fringe Festival star on a roll

“At its core, the play inspires people to go out and try new things, to be a hero in their own lives.”

Nancy Kenny remembers the exact moment she got the idea for Roller Derby Saved My Soul, her award-winning, one-woman fringe festival show.

She had performed at the Ottawa Fringe Festival ever since her enrollment as a theatre student at uOttawa, and had fallen in love with the Festival and its people. “They create their own work, travel across the country, perform, make money and drink beer,” said Kenny, laughing.

She had seen many solo fringe shows over the years and knew that she wanted to create one herself — but she had no idea where to start. Then, in 2009, she was browsing through a community newspaper in an Ottawa coffee shop when she read that the city was getting its first roller-derby team.

“I knew that was it,” Kenny says. “The light bulb moment. There just seemed something so theatrical about roller derby.”

The fact that she had never roller-skated or watched roller-derby didn’t stop her. She trained with teams in Ottawa and Toronto and, she says, “the story developed from there. I was turning 30 and feeling a bit left behind. My younger sister was already married and had kids.”

The play centres on Amy, who has just turned 30 and is still watching Buffy the Vampire Slayer reruns in her basement apartment. She can’t possibly live up to the example set by her accomplished younger sister.

“Amy is obsessed with comic book heroes and then discovers this sport where she, too, can be a superhero,” Kenny explains. “It’s a very heartwarming, charming, funny story. But at its core, the play inspires people to go out and try new things, to be a hero in their own lives.”

Kenny’s hit show premiered in 2011, and since then Kenny has been touring the country. The show has scooped up multiple honours, including a Best-in-Fest Award at the Ottawa Fringe Festival and a nomination for Best One-Person Show from the Canadian Comedy Awards.

“When the Alumni Association contacted me about doing the show during Alumni Week, I was really flattered. The school meant a lot to me,” says Kenny, who graduated in 2004 with an Honours BA in Theatre, with concentrations in political science and Canadian studies.

“My experience at uOttawa really helped me develop as an entrepreneur — or what I like to call an ‘artrepreneur’. I created a lot of events during my time there, and I learned how to become self-sufficient very quickly. I definitely wouldn’t be the person I am today without that experience.”

Kenny has been involved in theatre production since 2005, initially as a co-founder of Ottawa's Evolution Theatre before branching out on her own with Broken Turtle Productions. For more than a decade, she has also worked in marketing and promotions, most recently as a social media and community manager for VIA Rail. “I love travelling and appreciate the freedom and flexibility I get from working online,” she says.

Originally from Bathurst, New Brunswick, Kenny now calls Ottawa home, although she spends most of her time on the road. Most recently, she has been touring with The Little Prince for children’s theatre. Other credits include The Amorous Ambassador for Upper Canada Playhouse and Erasermen, a short film selected by the Toronto International Film Festival.

Fully bilingual, she translated into French, and then performed in, Edward Allan Baker's Dolores, which won an award for Outstanding Drama at the Ottawa Fringe Festival. She is also a founding member of Toronto’s only French improv league, Les Improbables. 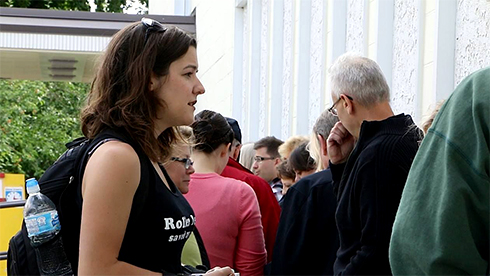 Kenny’s latest venture is the production of a feature-length documentary about the fringe festival circuit. “For years, people said there should be a doc about the Fringe. It’s such an interesting, weird and unique thing in this country,” she says.

In 2014, Kenny and two colleagues spent four months travelling across Canada to document eight fringe performers, including Kenny, in 10 cities. Now in post-production, On the Fringe will be test-screened at fringe festivals over the summer before targeting the documentary film festival circuit.

“Making movies is hard and costs a lot of money,” she says. “We raised $10,000 through Indiegogo, but I think I’ve spent about $40,000. It was difficult because we weren’t eligible for a lot of grants. On the other hand, we got an amazing sponsorship from Hunt Club Volkswagen, which provided us with a car to go across the country.”

Kenny is proud of the film and may add another skill to her lengthy resumé: “I never thought I’d be a film producer, but maybe this is something I’ll do more of in the future.”

And she is delighted to have returned recently to her alma mater with her hit show.

“The University of Ottawa offered a really well-rounded education,” she says. “I learned a lot about the technical aspects of acting. But I also learned about the social context of theatre, how it influences people and how art can change the way you see the world.” 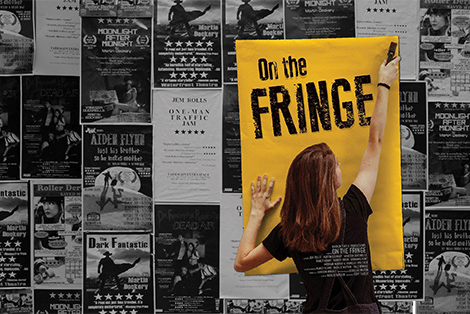