“Enthusiasm. If you’re passionate about your work, you’ll succeed. You also need good values and the right attitude. That’s the secret to success.”

When he was 20, Lino Maurizio loved law enforcement. And football.

So he enrolled in criminology at the University of Ottawa, hoping to embark on a career in police work and to play for the Gee-Gees. Unfortunately, an injury prevented him from throwing the pigskin for uOttawa, but he did end up making the big leagues in law enforcement.

Today, Lino Maurizio (BSocSc ’89) has some 40,000 employees on his team: he is in charge of investigations at SNC-Lavalin, one of the world’s largest engineering and construction firms.

After completing his bachelor’s degree in criminology, Lino Maurizio went on to build a brilliant career in law enforcement. He began as a probation officer for Quebec’s department of public safety before becoming a police officer with the Sûreté du Québec, Quebec’s provincial police force, where he climbed the ranks to eventually head up a joint RCMP task force on organized crime for five years. Up until 2013, he was the Sûreté’s top officer in the fight against organized crime at a time when the province was being rocked by allegations of collusion and corruption in the construction industry, brought to light by the Charbonneau Commission.

So when SNC-Lavalin was shaken by a series of scandals and frauds perpetrated by some of its managers, the company knew where to turn to for help. Today, with the hiring of Lino Maurizio, SNC-Lavalin aims to become the industry’s benchmark in ethics and compliance. 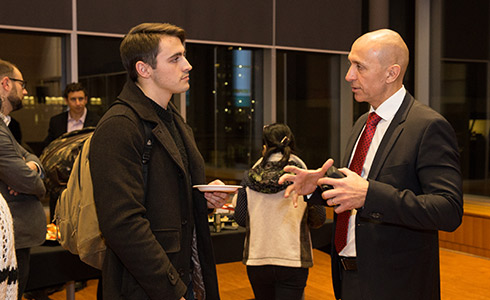 So what’s the secret to building such a successful career?

“Enthusiasm. If you’re passionate about your work, you’ll succeed,” Maurizio told students gathered in January to hear him and two other successful alumni speak as part of Deconstructing Success, a lecture series hosted by the Faculty of Social Sciences. “You also need good values and the right attitude. That’s the secret to success.”

But success has a price. This native of Valleyfield, Quebec, admits that he works very hard for his global employers.

“I spend about half my time travelling around the world because the company is active in 50 countries.” And even though it may seem enjoyable, all this travel keeps him away from his young family (he just became a dad) and can be exhausting. So don’t expect him to indulge in vacation travel anytime soon.

This meeting with students was a homecoming of sorts, since Maurizio had not had a chance to return to his alma mater in the 30 years since his graduation.

“At that time, I would have really appreciated a meeting like the one tonight, to discuss future employment prospects in my field. “

So, is there a future in criminology?

Absolutely, said the 49-year-old. But given that governments are always seeking to cut costs, students are more likely to find employment in the private sector. Companies are investing more and more in compliance investigation to protect their brands.

“Take, for example, Volkswagen: the consequences of poor compliance are too significant to ignore,” he said, referring to the global scandal that arose when news broke of the auto company’s deliberately falsified vehicle-emissions performance.

He finds investigative strategies fascinating, and spends days making sure that no one is doing business in a way that could harm his company’s reputation.

And to do so, he must travel the globe.

Since being hired by SNC-Lavalin, Lino Maurizio has had so many national seals stamped into his passport that he’s had to renew it twice. The Valleyfield native would never have guessed that studying at uOttawa would make the world his oyster.

Main photo:
Lino Maurizio (BSocSc ’89) is in charge of investigations at SNC-Lavalin, which employs some 40,000 people and is one of the world’s largest engineering and construction firms. Photo: Robert Lacombe