The inaugural recipients of the Faculty of Science Alumni Award of Excellence each began their journey the same way — by stepping into Marion Hall.

Since 1958, University of Ottawa Faculty of Science students have streamed into Marion Hall for classes, lectures, labs and study breaks. This is where their journey of discovery begins – only time will tell where that journey will take them. Since they say that “a rising tide lifts all boats”, the Faculty believes it is important to highlight its most successful alumni to raise the profile of this extremely successful alumni community and inspire pride in it.  Hence, the Faculty of Science created its Alumni Award of Excellence.

Given that this is a new award, there was naturally a need to make up for lost time. To do so, the Faculty selected a group or “class” of inaugural recipients of the Faculty of Science Award of Excellence.  This “super group” of science alumni  includes a world-renowned electrochemist, a pioneer in the Canadian banking and investment industry, a public sector leader, an award winning entrepreneur and patent guru, and a visionary inventor.

Ashok Vijh (PhD ’66 in Chemistry) is a world-renowned electrochemist and a research master at the Institut de recherche d’Hydro-Québec (IREQ), Hydro Quebec’s research arm. Ashok Vijh first set foot on campus in the early 1960s. He arrived in February from India armed with a sense of adventure and enormous ambition, which he parlayed into more than 360 research publications, six books and well over 60 distinctions from around the globe that recognize his contributions to science, most notably  the Killam Prize and the Order of Canada.

Robert (Bob) Gorman (BSc ’75 in Biology) Robert (Bob) Gorman (BSc ’75 in Biology) is a pioneer in the Canadian banking and investment industry. After earning a degree in biology, Bob Gorman focused on a career in banking and finance. In 1987, he joined TD Asset Management where he established a family of mutual funds. In 2015, when he retired as Chief Portfolio Strategist for TD Wealth, his group managed assets of more than $300 billion. Always a proud alumnus and supporter of the Gee-Gees, Gorman has generously donated to establish three endowed scholarships to support student-athletes, students in environmental science, and students in aquatic biology.

Denise Amyot (BSc ’76 in Biology, BEd ’77 and MEd ’91) is a true public sector leader. Denise Amyot’s career started in the classroom and has taken her to several public sector leadership positions. She has served as an Assistant Deputy Minister, as the President and CEO of the Canadian Science and Technology Museums Corporation, and is currently at the helm of Colleges and Institutes Canada. She is a passionate leader and a valued community volunteer. Over the course of her career, Denise Amyot has taken on countless volunteer appointments, including service as a member of the University of Ottawa Board of Governors. She is Director for the Regroupement des gens d’affaires (RGA), a group of Ottawa francophone business leaders, and she chairs the World Federation of Colleges and Polytechnics. To top all this, she is an active Twitter user with more than 2,200 followers.

Debbie Pinard (BSc ’79 in Mathematics and Physics) is an award-winning entrepreneur and patent guru. Always a trailblazer, Debbie Pinard was one of only two women in many of her classes in the late 1970s. Since graduation, she has been at the heart of innovation in the National Capital Region. She spent close to 20 years at Mitel, eventually leading a group of over 20 software and hardware engineers. She has also filed nearly 50 telecommunications-related patents. In 2011, her former employer, Sir Terrence Matthews, chose Pinard to become the VP, Innovation at Wesley Clover. She has since co-founded an award-winning start-up, called InitLive, whose disruptive technology aims to revolutionize the event management industry.

Ruey Yu (PhD ’66 in Chemistry) is a visionary inventor. Ruey Yu came to Canada in the early 1960s as an international student from Taiwan to study under Hans Baer. In a few years, he had earned his PhD and started a career at Canada’s National Research Council. He left Canada after five years to pursue career opportunities in the United States, where he partnered with fellow scientist Dr. Eugene J. Van Scott. Together they discovered that alpha-hydroxyacids (AHAs) are extremely beneficial to human skin. Dr. Ruey Yu and Dr. Van Scott went on to found the NeoStrata skin care company. Under their guidance, this company’s discoveries revolutionized the skincare industry.

All five of the inaugural recipients of the Faculty of Science Alumni Award of Excellence have one thing in common: each started their journey by stepping through the doors of Marion Hall to pursue a passion for scientific discovery. 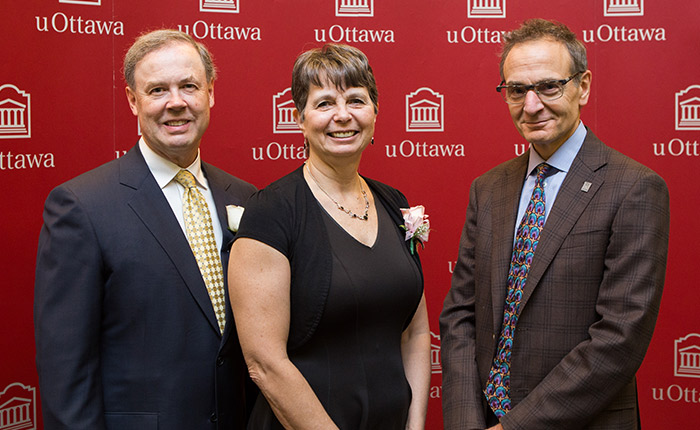