“I created this project in 2007 to expose students to the cultures of people of African descent in order to encourage dialogue between the different cultures present in the schools.”

Don’t be fooled by his ponytail and dreadlocks: Abdi Bileh Dirir’s personality and work embody the spirit of UNESCO. Bileh is an adult education teacher at Le Carrefour who specializes in French and History, and who is also a philanthropist working on humanitarian projects.

Over the years, this alumnus of the Faculty of Education (BA ’04 in History, BEd ’07 and MA ’14 in History), who was born in the Horn of Africa, has organized activities in the schools governed by Ontario’s French-language public school board (CEPEO). One of these projects, entitled “Qui sait, gagne” (Who knows, wins), was designed to highlight Black History Month and has earned him solid praise.

“I created this project in 2007 to expose students to the cultures of people of African descent in order to encourage dialogue between the different cultures present in the schools,” he explained.

Over the years, Abdi Bileh Dirir developed the idea for the game, which allowed him to partner with the Canadian Museum of History, the Canadian Commission for UNESCO and the Paris office of UNESCO. The latest edition of the competition, which initially involved 700 students from CEPEO schools, now involves more than
2000 students.

But Bileh’s community engagement does not stop there. A few years ago, he took part in a humanitarian project sponsored by a non-profit organization to build a hospital in Somalia.

“In a certain region of Somalia, there was no hospital for pregnant women, and the closest such facility was three hours away. Women were dying in childbirth. We raised the funds needed to build this hospital in a central location in order to save many lives.”

Inspired by this altruism, in 2015 Bileh co-founded a Canadian association for the promotion of African heritage known as l’Association canadienne pour la promotion des héritages africains (ACPHA) which aims to raise awareness among Canadians of the culture and contributions of people of African descent.

The ACPHA also incorporates a humanitarian mission that aims to build hospitals and schools in underprivileged areas of East Africa and Haiti. The organization also works to provide potable water, community health services and basic education.

“This year, we have partnered with a local association in northern Ethiopia, which we will visit this summer. We will help our partners with basic education programs and the settlement of nomadic groups. We have also been invited to meet with another local association in Djibouti. We hope to travel to Djibouti and Ethiopia this summer,” he explained, visibly happy to contribute to development projects that he knows well.

Bileh is dedicated not only to humanitarian projects, but also to the development of Ottawa’s young Francophones.

“When my son was seven, I started coaching a soccer team that came for a disadvantaged neighbourhood, where most of the kids hated school. I asked the City if I could reserve a small training area and they let me use it for free.”

When winter came, Bileh wanted to continue working with these kids, so he asked his son’s school if he could get some time in the gym for the season, and the school said yes.

“The kids learned to be part of a team, and also began feeling part of their school,” he said, all smiles.

This initiative lasted more than five years. The kids in the program we allowed to participate in tournaments for free thanks to sponsorship from the Somali Centre league. They won several tournaments and began accumulating trophies, with some kids later joining competitive leagues.

Bileh’s contagious optimism is certainly his secret weapon, gaining him cooperation from the adults he teaches, along with all those who cross his path and so easily share his humanitarian dreams.

Because, after all, Abdi Bileh Dirir is simply a man who sows hope … 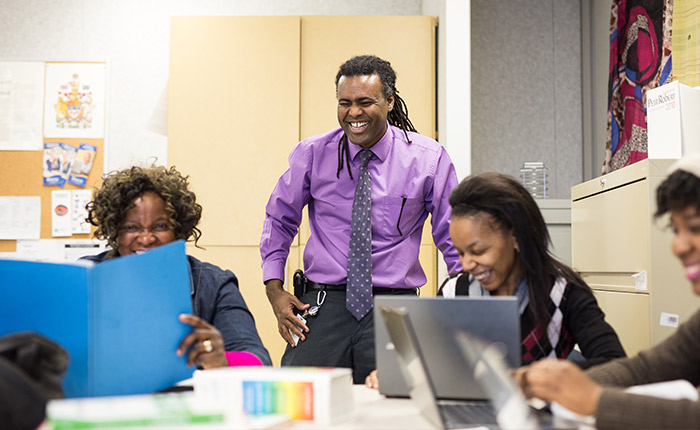