“I grew up here. This is where I cultivated lifelong interests and discovered how much I love law. I have enormous affection for the place and feel I owe it a lot.”

Allan Rock’s roots at the University of Ottawa run deep. When his mandate as president and vice-chancellor ends on June 30, 2016, he will have spent 19 years of his life in and around Tabaret Hall.

He first walked into the building’s majestic rotunda at age 12, as a student entering the University of Ottawa High School. He later completed a uOttawa BA in 1968, followed by a law degree (LLB ’71). Then, after three full careers — as a trial lawyer, Member of Parliament and cabinet minister, and as Canada’s ambassador to the United Nations — he returned in July 2008 to lead his alma mater.

“It was a chance to give back to an institution that has been such a positive influence in my life,” Rock said. “I grew up here. This is where I cultivated lifelong interests and discovered how much I loved law. The University’s values, people and traditions made a deep and lasting impression on me. I have enormous affection for the place and feel I owe it a lot.”

Many in the University community feel that Allan Rock has paid off this debt, in spades.

Under his leadership, uOttawa has built or broken ground on $400 million worth of new space for students, including the Learning Centre, the Social Sciences Building, the Advanced Research Complex, University Square and the new Gee-Gees playing field at the Lees campus.

It has hired new faculty at a rate unequalled by any other research-intensive university in Canada — nearly 60 tenure-track professors since 2013 — while reducing class sizes, increasing student averages upon entry and expanding experiential learning programs.

The University has also raised its international profile by forging important partnerships with the Max Planck Society in Germany, Shanghai Jiao Tong University in China and the Université de Lyon in France, among others.

But beyond the litany of accomplishments, Rock has been the soul in the machine. His passion for improving the student experience, his international outlook, deep commitment to bilingualism and championing of research have exemplified the four pillars of the University's Destination 2020 vision. As much as uOttawa has shaped him, he has shaped the University.

Allan Rock honed his oratorical, political and diplomatic skills as a uOttawa student. As president of uOttawa’s English Debating Society, he faced teams from Harvard and Oxford — and won.

His first foray into politics was as president of the student federation in 1969. In that role, he earned street cred for life by walking in on John Lennon and Yoko Ono’s bed-in for world peace in Montreal and persuading them to attend a peace conference at uOttawa.

As a student radio host, he would scour newspapers for interesting visitors to Ottawa, then call up the Chateau Laurier and ask for them by name. In this way, he reached people like William Fulbright, a prominent U.S. senator opposed to the Vietnam War, and Christiaan Barnard, the South African surgeon who performed the world’s first human heart transplant.

He also interviewed Prime Minister Lester B. Pearson, Leader of the Opposition John Diefenbaker — and Simon & Garfunkel, bringing the folk-rock duo cups of tea in exchange for an interview backstage at the old Capitol Theatre on Bank Street. 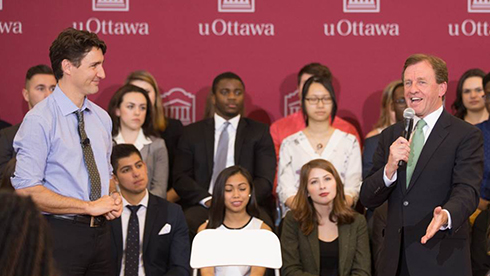 A former student leader who got the most out of his own years on campus, Rock has been intent on improving the university experience for students. At the start of his mandate, he even lived in residence at 90 University for five weeks after moving from Windsor, Ont., where he had practised law after serving as UN ambassador.

Marc Jolicoeur (LLB '78), former chair of the Board of Governors that hired Rock, recalls thinking the stint in residence was “a great way to learn more about our students” and integrate into campus life.

“The one thing Allan showed us from the day he arrived was his commitment to students,” Jolicoeur said. “Making sure that we offered them the best academic and university experience was always very high on his list of priorities. He was the students’ biggest ally.”

Rock’s stay at 90U reminded him that living close to classrooms builds community. Many uOttawa students are commuters, which can make it difficult to feel a sense of belonging. Although student appraisals of their uOttawa experience have steadily improved — with 88% satisfied in a 2015 survey — Rock says more students living on campus will help create stronger bonds.

Rock says he had a lot to learn about his new role in those early days. “I had not been a dean or a vice-president of a university, and it was a new world for me. I’m very grateful for the kindness and patience of faculty and staff in supporting me during my learning curve.” 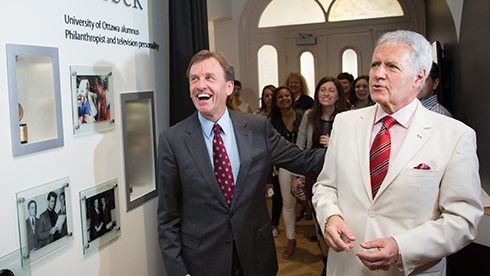 “We were dealing with infrastructure built for 25,000 students, but we had 40,000 students on campus,” Plato said, adding that the growth sometimes caused friction with the Sandy Hill community. Rock took action, convincing the Board to slow the increase in student numbers, hire more professors and create more space. Since 2011-2012, the student population has been kept at around 43,000.

Plato first met the University’s president in May 2012, on a day the Board was set to vote on raising tuition fees and students were protesting in Tabaret Hall.

“It was my first week as SFUO president and all of a sudden Allan Rock was outside my office. It was like being thrown in at the deep end,” Plato said. “We sat down and had a pretty frank discussion on a particularly difficult topic. It opened up an ongoing dialogue between us on a variety of issues. He remembers what it’s like to be a student, and our relationship was built on mutual respect.”

Mathieu Fleury (BSc '08), City of Ottawa councillor for Rideau-Vanier, says Rock’s diplomatic skills were also key to creating the Town and Gown Committee. Formed in 2012, the committee has eased tensions with the community by bringing together representatives from the University’s housing and protection services, the student federations, local residents and city planning officials.

“Allan Rock is the ultimate connector,” Fleury said. “He knows who the stakeholders are, where the resources are, and he picks up the phone.” He is also “a tough negotiator” who kept the safety of pedestrians and cyclists front-and-centre during discussions on the construction of the Light Rail Transit line that will run alongside campus in 2018. 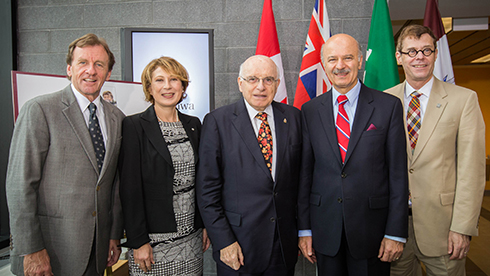 Building for the future

The University’s appearance has changed dramatically over the past eight years, with more improvements on the horizon. The award-winning Campus Master Plan includes the Learning Centre, due to open in 2018, a new black box theatre at the Arts Court on Waller Street, opening in 2017, and consolidation of the Faculty of Health Sciences on the Lees campus.

The $100-million Advanced Research Complex (ARC) — opened in 2014 and dedicated to photonics and geoscience — is the jewel in the crown when it comes to uOttawa’s ambition to be among Canada’s top five research-intensive universities. Vice-President, Research Mona Nemer recounts how Rock was always very supportive of ARC, but as the project grew and more floors were added to the plan, it wasn’t always an easy sell to some in the University community.

“We had to finesse our way, and Allan was instrumental in getting buy-in from the deans and then going to the Board,” Nemer said. “He’s a very sharp guy when it comes to analyzing people and situations.”

She recalls how Rock drove to Rochester, New York, one Sunday six years ago to convince Robert Boyd to join uOttawa as Canada Excellence Research Chair in Quantum Nonlinear Optics. It would be a hiring coup and “position the University as a key player, if not the key player, for photonics in Canada,” Nemer said.

On that day in 2010, Rock found himself in a hotel room watching the Vancouver Olympics gold-medal hockey game between Canada and the U.S. Just as it went into overtime, he had to turn off the TV to try to seal the deal with Boyd. “The University of Ottawa won a gold medal that day, because we got that brilliant scientist to join us,” Rock said. 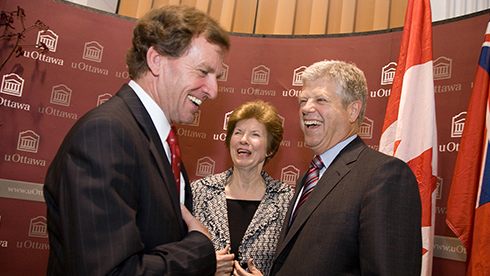 Opening up to the world

Rock is quick to stress that the University’s successes are the result of a team effort by faculty, staff and the vice-presidents.

“As manager of the team, I’m fortunate in being able to take credit for home runs hit by other people,” he said. “If there’s one area where I hope I’ve had a modest impact, it’s in helping to make this a globally engaged university.”

Huguette Labelle (BSCN '60, MEd '68, PhD '80), uOttawa chancellor from 1994 to 2012, agrees. “Having been involved at the UN, Allan saw the importance of moving much more rapidly to internationalize the University and to encourage students to serve their communities — locally, nationally and internationally,” she said.

Rock has championed the University’s CO-OP program and the Michaëlle Jean Centre for Global and Community Engagement. Most uOttawa students now take part in at least one experiential learning activity — at the Entrepreneurship Hub, for example, or through the Undergraduate Research Opportunity Program. The new Allan Rock Scholars Fund further promotes this mission of global citizenship and education with a social purpose.

“We’ve encouraged our professors to work in partnership with colleagues around the world and we’ve more than doubled the number of international students,” Rock said.

The University is also reaching out to its alumni as never before. “When I began, my first alumni event in London, England, was six people around the breakfast table. The last time we were there we had almost 300. Word is getting out to our alumni that the University is interested in them.” 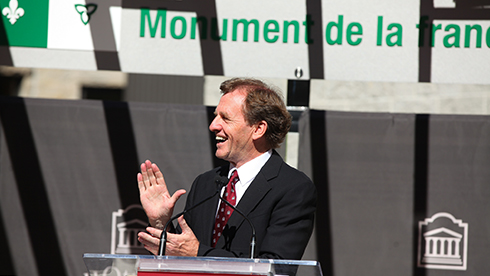 Alongside advocating for a global mindset, Rock feels strongly about respecting uOttawa’s roots.

“Allan conducted 95% of the interview in French, which was quite impressive. And bilingualism is not just being able to speak the language, but also to understand the culture, and that was evident from the first time we spoke.”

There are no signs of Rock easing off as he prepares to hand over to Jacques Frémont, who he says “is going to be an outstanding president, with a great team.” The University of Montreal professor emeritus and former president of the Quebec Human Rights and Youth Rights Commission becomes uOttawa’s 30th president and vice-chancellor on July 1.

Rock is so deeply embedded in the University that he will not be gone for long. After a sabbatical, during which he will spend a semester at a U.S. law school, he hopes to teach in the Faculty of Law.

Few are surprised that he plans to return to campus after a quick recharge.

“The level of energy he gave to this institution — this is not somebody who was sitting back, he was totally engaged,” said former chancellor Huguette Labelle. “Allan is an innovator and extremely hard-working. He gave a lot of himself, and never stopped.” 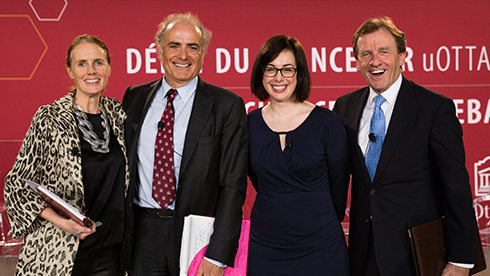 Main photo:
Allan Rock, University of Ottawa president and vice-chancellor for the past eight years, reaches the end of his mandate on June 30, 2016. Photo: Robert Patterson