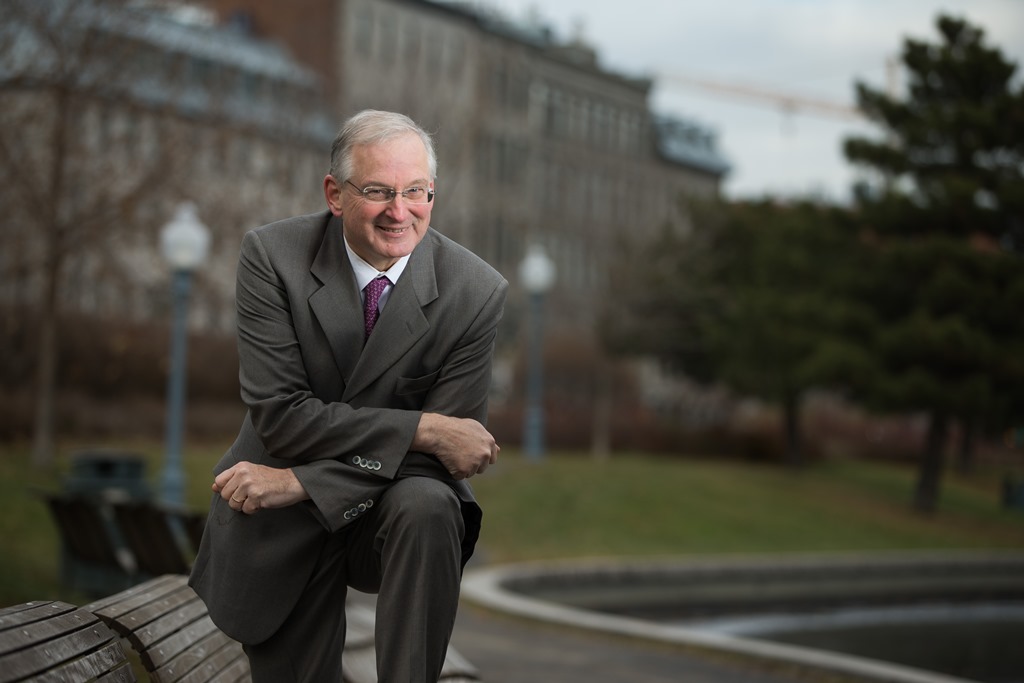 The Gazette recently sat down over pastries and coffee with the University of Ottawa’s new president as he was looking forward to his first day on the job – and thinking ahead to 2060.

What drew you to the academic life?

University was always part of our everyday life when I was young, so it came very naturally. My father taught physics and astronomy at Laval University, and was also a university administrator later on. When I was 10 or 12, and my sisters were younger, my mother decided to go to university, in her early 30s, which was very unusual then. She went on to get her doctorate in psychoanalytic literary criticism and became a lecturer at Laval. She’d bring friends home from the literature department, which was hugely different from the scientific world of my father. It was a fascinating home to grow up in.

From my first week of law school, I thought law was so much fun, and it has been a passion ever since. Life was very good to me because after graduate studies I rapidly found a job at the University of Montreal law school. And once we had the Canadian Charter of Rights and Freedoms, after 1982, it was a fascinating time to teach law, because at last we had a real instrument to make a difference on equality and human rights. And I love teaching. I would love to teach while I’m president, but I’m under no illusions – certainly not for the first couple of years.

Were there other early influences that fed your desire to make the world a better place?

I was educated by the Jesuits – need I say more? – at Collège Saint-Charles-Garnier in Quebec City. And I wanted to change things. When you’re young, it’s a great attitude to have.

Why did you choose the University of Ottawa?

The University is en croissance, growing, intellectually and research-wise. I found the decision to slow the growth in student numbers fascinating – it’s rare to see that in Canada. And Destination 2020 is very original. The personality of the University of Ottawa comes through strongly, and it’s a terrific asset.

Some presidents arrive and there is no strategic plan, but I have an excellent one and it’s clear to me that its four elements will remain relevant. However, the challenge is not 2030 – it’s 2060. We will really have to think about where we figure the whole parade is going – what will the fundamentals of higher education be by then?

Universities have been fairly stable as an institution since the Middle Ages, but are in the process of changing radically. The role of higher education has changed in the past 20 years to an extent we don’t always realize. Now everybody has access to knowledge, so that part of the positioning of universities – of having knowledge that others don’t have – is not the case anymore. Their added value has to be somewhere else.

The University of Ottawa also attracts me because it’s rare for a university to have four great axes of research, and it indicates that a fundamental intellectual exercise has been done. Of course, we won’t recognize those four axes in 10 years. They will evolve, they have to evolve, but we are collectively embarked on that adventure. We need to look ahead to the ideas of 2050 or 2060, which will then make it much easier to answer concretely for 2030.

On internationalization, we have some reflection to do. We’re not doing this just to get more foreign students. We’re doing it because the world has changed, and we will not do a proper job if we don’t take stock of the importance of internationalization. The mindset has to apply to all disciplines and all faculties.

What are you most looking forward to?

July 4th, my first day at work. And to meeting the community, to listen, to understand. Universities are all the same in some respects and all very different in other respects, and it’s the differences I want to understand. How do people see themselves in the community? If there are tensions, what are those? And what are the strengths? I want people to speak their mind – and also to explain what they are doing, because I know so little about so many things.

What do you think your biggest challenges are going to be?

Everything to do with finance will be fairly steep, among other things because of the change in the province’s university funding formula. Budgetary choices are always a challenge, to make sure that academic and scientific considerations are at the heart of every decision. And I’ll have to find a provost and a vice-president, research, and a dean of medicine. The very positive aspect is that we’ll be able to gradually build a team with people who share the same vision and are willing to write the next chapter, because that’s what it’s all about.

Tell us about your family.

I have two grown children – my son works in Lausanne and my daughter in Montreal. They both chose law, and I swear that I didn’t influence them in any way! My wife teaches criminal law at the University of Montreal, where she was vice-president of human resources and planning until recently.

Do you have a passion?

In winter, I love downhill skiing. In summer, I do a lot of cycling, so coming to Ottawa is very exciting. If I can leave the office around 6 o’clock, I’ll ride for a couple of hours before going home. And I love music, especially opera. La Traviata is a favourite – very romantic. Nowadays I also listen to a lot of Wagner, but I’m eclectic. On the road, it’s rock ‘n’ roll and blues and jazz.

I read a lot, mostly international affairs, and I love fiction. I’m usually reading two, three or four books at the same time on the Kindle on my iPad. But reading physical books is also a pleasure. When I left the University of Montreal, I gave all my books to the law library, except for two shelves. Those books are too dear to me, and I’ve moved them to Ottawa. They’re mostly about legal theory and the great legal philosophers. I’ve taught them, read and re-read them, and written about them. There’s an emotional link there.

Someone challenged me the other day to say how many countries I’ve been to, and it was 88. For me, travelling is the most extraordinary thing, how we now have the facility to be somewhere else in just a few hours, in a different culture, with different people. As academics, the privilege is that you get to meet so many more people than the hotel staff and a couple of guides – and the relationship is so different, that travelling in a conventional way after that, for me, is not travelling. The experiences I’ve had in some countries were so fabulous, I’ve often said: when I think I’m being paid for what I do – I should pay to do what I do.