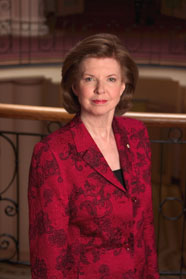 Huguette Labelle was Chancellor of the University of Ottawa from 1994 to 2012.

Huguette Labelle was president of the Canadian International Development Agency from 1993 to 1999, deputy head of the Millennium Bureau of Canada in 1998, deputy minister of Transport Canada from 1990 to 1993, chair of the Public Service Commission of Canada 1985 to 1990, associate secretary to the Cabinet and deputy clerk of the Privy Council in 1985, and under secretary of state in the Department of the Secretary of State from 1980 to 1985. From 1973 to 1980, she held senior executive positions in Indian and Northern Affairs Canada and in Health and Welfare Canada. Before joining the Canadian government, she held management positions in health science education and in nursing education. Between 1974 and 1976, she acted as a consultant to the governments of Haiti and Cuba on health care planning and on health sciences education.