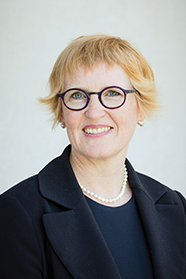 Jill Scott has been named  Provost and Vice-President, Academic Affairs at the University of Ottawa for a five-year term beginning on September 1, 2019. Prior to joining the University of Ottawa, Jill Scott served as Vice-Provost (Teaching and Learning) at Queen’s University from 2013 to 2019, where she was responsible for enhancements to the student learning experience. She also oversaw the quality assurance processes, the Centre for Teaching and Learning, online learning, educational technologies, classroom infrastructure renewal, student ratings of instruction, academic integrity, and diversity and inclusion in the curriculum. During this time, she led several HEQCO-funded research projects on learning outcomes assessment, aiming to measure student achievement of critical thinking, problem solving and communication in several disciplines across four years of study. This groundbreaking research on assessing higher-order cognitive skills earned her national and international recognition. From 2018 to 2019, Jill Scott served as Interim Associate Vice-Principal (International)  at Queen’s, where she oversaw the university’s Comprehensive International Plan, the International Office and the International Programs Office, with responsibility for international delegations, agreements, academic programs, research, and student mobility.

Equity and inclusion for Indigenous peoples have been a particular focus of Jill Scott’s administrative and academic contributions. She co-chaired the Task Force on Truth and Reconciliation at Queen’s University and co-led the development of Queen’s Indigenous Studies program. She has conducted SSHRC-funded, community-based research on Kanien’kéha (Mohawk) language revitalization with the Tsi Tyónnheht Onkwawén:na Language and Culture Centre in Tyendinaga. Jill Scott was a member of Queen’s Aboriginal Council (2013-2019) and supervised numerous dissertations in Indigenous Studies.

Jill Scott holds degrees in French and German Literature and in Comparative Literature from the University of Manitoba (BA), Carleton University (MA) and the University of Toronto (PhD). She is also a professor in the Department of Modern Languages and Literatures at the University of Ottawa. Prior to her appointment at uOttawa, she was a professor in the Department of Languages, Literatures and Cultures at Queen’s University, with cross-appointments to Gender Studies and Cultural Studies. Her research interests include Indigenous language revitalization, restorative justice, forgiveness and reconciliation, German and Austrian literary modernisms, and teaching and learning in higher education. Her publications include Electra after Freud: Myth and Culture (Cornell UP, 2005) and A Poetics of Forgiveness: Cultural Responses to Loss and Wrongdoing (Palgrave, 2010). Jill Scott has authored and co-authored numerous articles in the fields of Indigenous Studies, literary studies, and assessment of learning in higher education. She is fluent in English, German, and French, and is studying Kanien’kéha (Mohawk).