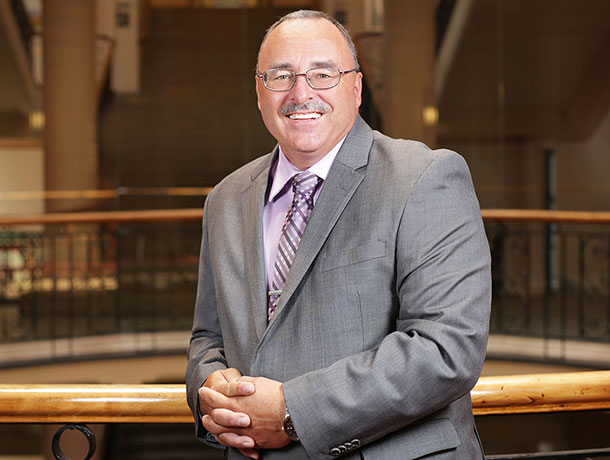 Sylvain Charbonneau took office as Vice-President, Research and Innovation on January 29, 2018.  His term will end on June 30, 2028.

Mr. Charbonneau received his B. Sc. And M.Sc. in Physics from the University of Ottawa and his Ph.D. degree in Photonics – Semiconductor Physics from Simon Fraser University, British Columbia in 1988. He joined the Institute for Microstructural Sciences of the National Research Council (NRC) in October 1988.

For a period of 10 years, he was involved in a number of research activities within the institute and led such development programs as wavelength routing and switching for optical fiber communication systems and more exploratory research efforts in the field nano-photonics. He has published over 180 papers and has seventeen patents and licenses in the field of photonics, nanotechnology and ICT.

From 1998 to January 2000, he took on the responsibility of Director of Components Technologies for the Institute of Microstructural Sciences at NRC. His responsibilities included components related research and development programs for the Institute. During that period, he was staked by the President of NRC to develop and formulate a Strategic Plan and a Business Plan for the NRC-Ontario Cluster initiative – the Canadian Photonic Fabrication Center (CPFC). In addition to formulating the business component of this Program, his responsibilities also included getting the financial resources in support of the initiative - $80M over 9 years.

In late 2000, Mr. Charbonneau, along with three other colleagues, founded a company, Optenia Inc. an NRC spin-off in the communications technology sector. With its 56 employees, the company focused on novel WDM components for fiber to the home application. As founder and Chief Technology Officer, Mr. Charbonneau’s responsibilities included the management of all research and development activities and the formulation of the research road map for the firm.

In 2002, Mr. Charbonneau returned to the Institute for Microstructural Sciences as the lead Director responsible for the construction, the implementation, the management and operation of the CPFC and several other groups within the Institute.

In May 2011, Mr. Charbonneau was named Executive Director responsible for the strategic development of the Printable Electronic Flagship Program – one of four such programs across NRC, accountable for the development of the strategic plan, and its implementation, execution and monitoring. Once fully deployed, this program included a multidisciplinary team of over 100 FTE with a budget of $50M over 5 years.

In April 2013, Mr. Charbonneau took the position of Associate Vice-President, Research at the University of Ottawa.

The Vice-President, Research and Innovation establishes priorities, policies and practices that attract and retain outstanding researchers at the University of Ottawa. The Vice-President, Research and Innovation also works with industry partners, government leaders, granting councils and other research institutions to create a dynamic and stimulating environment for research in Canada for the benefit of Canadian society.

The Vice-President, Research and Innovation works in partnership with stakeholders in the affiliated hospital research institutes to advance research and innovation.