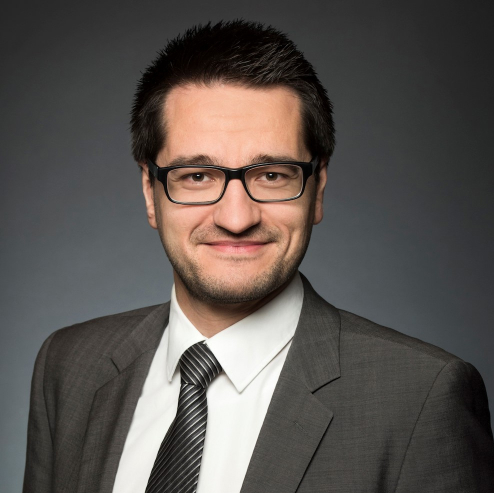 Dr. Florian Martin-Bariteau is an Associate Professor of Law and Technology at the Faculty of Law, Common Law Section and the Director of the Centre for Law, Technology and Society at the University of Ottawa. A technologist and creative turned legal scholar, his research focuses on technology law, ethics and policy, with a special interest in blockchain, artificial intelligence, cybersecurity, whistleblowers and intellectual property.

Recipient of the 2019 Common Law Emergent Researcher Award, Dr. Florian Martin-Bariteau is an internationally recognized thought leader on technology policy engaged in shaping frameworks that safeguard rights and liberties in the digital context to build a more secure and inclusive society. He has published in leading journals and publishing houses in French and English, and presented his work across the globe to academic and policy audiences. He regularly comments on technology-related news in national and international media outlets. His research is funded by the Social Sciences and Humanities Research Council (SSHRC) of Canada, as well as by several foundations and philanthropic gifts.

Beyond leading Canada’s premier research group on technology law, ethics and policy, Dr. Martin-Bariteau is the Scientific Director of the AI + Society Initiative. He also co-leads, with Dr. Elizabeth Dubois, Connected Canada, a pan-Canadian interdisciplinary research initiative on citizenship in a digital context. In addition, he serves on the Board of Directors of the NCE SERENE-RISC, Canada’s smart cybersecurity network, and is involved in two SSHRC Partnerships, Autonomy through Cyberjustice Technology and Global Journalism Innovation Lab.

Prior to joining the University of Ottawa in September 2016, Dr. Florian Martin-Bariteau was a Lecturer in the Faculty of Law and in the Department of Computer Sciences (DIRO) at Université de Montréal. He was also the Coordinator of OpenUM and the L. R. Wilson Chair in Information Technology and Electronic Commerce Law. In 2015, he was named an Internet Policy Global Fellow of the Instituto de Technologia e Sociedade (ITS Rio, Brazil), and a Young Scholar of the Jean-Louis-Baudouin Chair in Civil Law at the Université de Montréal.

Dr. Martin-Bariteau also holds a Licence in Law (with distinctions and Dean’s List), a Maîtrise in Business Law, and a Master in Intellectual Property and Information Technology Law (with distinctions) from the Université d’Aix-Marseille (France). In addition, he holds both a Certificate in Criminal Law, Criminology and Forensic Sciences, and a Certificate in Legal and Moral Sciences.

During his studies, Dr. Florian Martin-Bariteau has held several positions as Chair or board member of various non-profit organizations, in Canada and France. He served as the Vice-President for Student Affairs at the Université Paul-Cézanne Aix-Marseille III from 2008 to 2011. From 2011 to 2012, he was a teaching assistant and junior lecturer at the Faculty of Law and Politics of the Université d’Aix-Marseille. He has also worked as a developer, a creative and a publicist. He now leverages the knowledge and skill sets acquired from these experiences to support knowledge dissemination, and meaningful engagement with stakeholders and research users.

Dr. Florian Martin-Bariteau welcomes enquiries from students interested in undertaking research and pursuing graduate studies in his fields of expertise. He is authorized to supervise students at all levels, including Ph.D.