Leading lights of the law 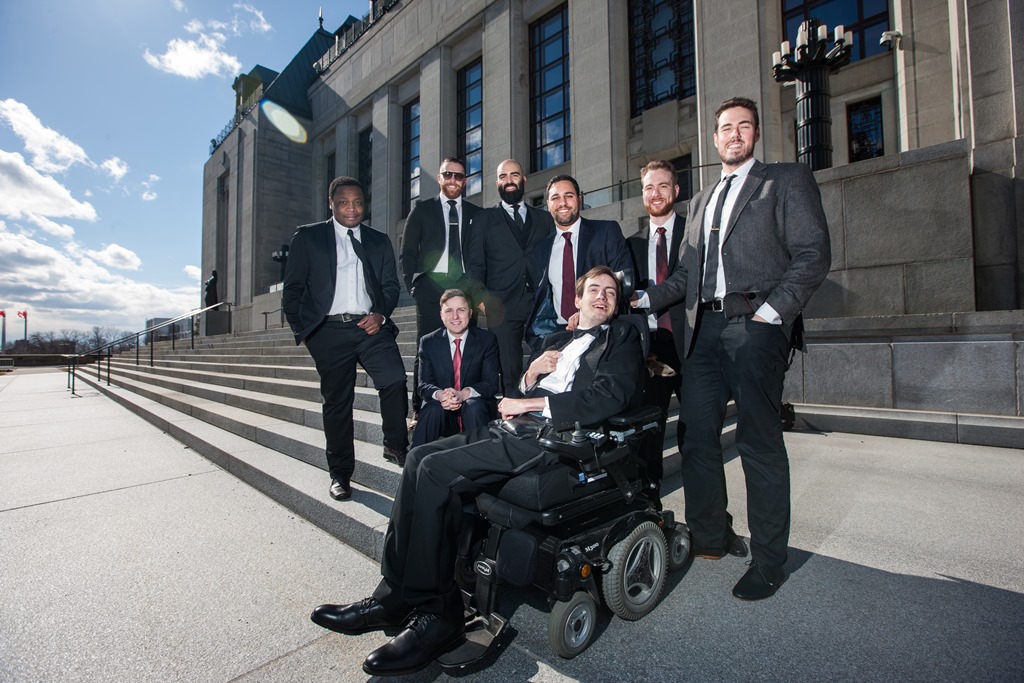 John McCrea plans to use his new Juris Doctor (J.D.) degree to continue to advocate for accessibility for people living with disabilities. McCrea, a uOttawa student with cerebral palsy living in residence, successfully lobbied the University to provide personal care to help him go to bed, get dressed and make meals at times when he needed it.

“Before this program was in place, I was getting all my support through outreach care in the community,” McCrea said. “A personal care worker would come into residence at a certain time and I would have an hour of help to do whatever I needed.”

“That wasn’t really practical. If I had to finish an essay or finish reading but my bedtime was set for 9 p.m., there was nobody to put me to bed any later. It did have an adverse effect on my academic life.”

McCrea, who uses a motorized wheelchair, raised the issue with University president Allan Rock. A private personal care agency was contracted to provide services to people with disabilities living in residence from 10 p.m. to 6 a.m. on weekdays and around the clock on weekends.

Throughout his time on campus, McCrea also pointed out areas in the physical environment that needed  minor improvements, such as new push-button wall switches to open doors. He also secured the use of accommodation measures and assistive technology, such as a scribe to write exams, course materials in digital formats and dictation software to write essays.

During the summer of 2014, he worked at the ARCH Disability Law Centre in Toronto, where, under the supervision of a lawyer, he proposed amendments to the Services and Supports to Promote the Social Inclusion of Persons with Developmental Disabilities Act. In August, McCrea will begin articling at Weir Foulds LLP, a Toronto law firm that practices corporate, property and government law, and litigates accessibility-related cases.

Savannah Gentile found her calling as a third-year student in a course on prison law. Inspired by her professor and mentor Kim Pate, she became involved in lobbying to find solutions other than jail for vulnerable women.

In April, Gentile secured a fellowship with the Canadian Association of Elizabeth Fry Societies (CAEFS), which advocates for women prisoners. Today, she’s working with Pate, the CAEFS executive director who received a uOttawa honorary doctorate in 2012.

Gentile helped organize a recent conference, A Word: Reclaiming Advocacy, which featured the Honourable Madam Justice Louise Arbour and Correctional Investigator Howard Sapers. When the fellowship ends this summer, she will begin articling at the Community Legal Clinic of York Region.

“I’m the first person in my family to graduate from university,” Gentile said. “I grew up in subsidized housing and my mother was a single mum, and I have two older sisters. It was not always easy.

“Growing up the way I did, I have a very acute sense of injustice and oppression,” she said. “I also am a queer woman and that compounds things for me. As the cliché goes, I wanted to make a difference.”

As a student, she helped organize panel discussions with the uOttawa OUTLaw group, an organization for lesbian, gay, bisexual, transsexual and queer law students. This year, she organized a variety show that raised $564 for the Spectrum LGBTQ+ Community Youth Group.

“I think sometimes academics, lawyers or advocates can become a little distant from the issues,” she said. “In law school, poverty is talked about as if it doesn’t exist in the room. That’s not very far from the truth. But for somebody who grew up in poverty, it can be a little isolating. With prison law, it was like I found a home.”

Mayoori Malankov came to Canada as a Tamil refugee from Sri Lanka when she was two years old. She grew up watching her mother and father help other refugees adjust to a new life in Canada, and dreamed of practising law.

She has stayed true to this goal, and to her roots. After she receives her Juris Doctor degree from the University of Ottawa on June 17, she will begin articling at the South Asian Legal Clinic of Ontario.

“It is my dream articling position because it specializes in providing free legal services to low-income and vulnerable members of the South Asian community, which I am part of,” Malankov said. “From a young age, I saw how my parents had to work really hard to be able to provide for our family and build a new life here. That shaped my perspective.”

As a uOttawa student, Malankov helped a family bring their Syrian refugee grandmother and aunt to Canada thanks to the University’s Refugee Sponsorship Support Program. The nationwide initiative matches prospective private sponsors with lawyers and law students who work pro bono to guide them through the complicated legal process.

She also helped develop public education workshops to teach high school students about the refugee crisis. Malankov chaired the Ottawa chapter of the Women’s Legal Education and Action Fund, which organized panel discussions about access to reproductive health for women, and visited high schools to teach kids about sexual consent.

Armed with her JD degree, she plans to focus on refugee advocacy and family law.

“It is an honour to see that piece of paper, finally,” she said. “It feels great knowing that I am now going to be entrusted with the responsibility to serve others, as I have always wanted to.”